In this post we will use Spark to generate random numbers in a way that is completely independent of how data is partitioned. That is, given a fixed seed, our Spark program will produce the same result across all hardware and settings. To do this, we introduce a new PRNG and use the TestU01 and PractRand test suites to evaluate its quality.

Most programming languages come with one or more built-in pseudo-random number generators (PRNGs). If you are reading this, you have probably used some several times.

There are many types of PRNGs, and most of them are operated in the same way. You set a start state (the seed), and then for each invocation you get a fixed number of bits (typically 32 or 64 at a time, so we refer to these as numbers). If you know the seed, you can repeatedly generate the same sequence of bits.

‌This fundamental design of the PRNGs doesn’t lend itself well to be used in distributed computing. If we want to generate a random sequence in parallel, we typically will use the same PRNG with different seeds for each parallel process. The problem with this approach is that when the level of parallelism changes, the resulting sequence will also change.

‌Spark SQL provides the rand() function, which suffers from exactly this problem. An instance of the PRNG is created for each partition and seeded by the global seed plus the partition index (see eval and codegen). The partitioning may change if your Spark program is executed on different cluster topologies, in different modes, with different settings, or if the defaults change with new versions of Spark.

Some PRNGs, like the PCG and those proposed here, support advancing a PRNG to an arbitrary state, which specifically could be used to solve our problem. However, for this work I wanted to avoid using third-party libraries.

To summarize, we would like to generate a sequence of random numbers for rows in a dataset using Spark in such a way that the method is completely agnostic to how the data is partitioned and the underlying stack the Spark job is running on.

The algorithm basically enumerates rows and then apply a hash function to row indices. The hash values are the pseudo-random numbers.

I doubt that this is a novel idea, but while I was researching the problem, I didn’t find any examples of it being used. So before going into details, I would like to share my intuition behind going with this approach.

‌The family of linear congruential generators (LCGs) share similarities with textbook multiply-mod-prime hash functions (you know, h(x)=ax+bmodp for a, b, and prime p chosen at random). Basically, the state of the LCG is hashed to generate the next number, which is then the new state. Multiply-mod-prime will, in expectation, disperse the hash values of an input sequence of numbers in [0,p−1], but due to its linearity, hashing the numbers from 1 to n will give a sequence of evenly spaced numbers (mod p). This will not qualify as a sequence of random numbers. However, widely used hash functions like Murmur3 and xxHash are known to have good avalanching, i.e., a small change in input yields a big change in the output, and dispersion, although no formal properties have been proved for them.

Combining these observations, we arrive at the algorithm.

Scala code for the Spark algorithm is given below.

The function takes a DataFrame and produces a new DataFrame with an additional column containing the random numbers. We use the zipWithIndex() function on RDDs to generate indices from 1 to n for the rows of the DataFrame. Note that calling this function will trigger an action (see code).

For hashing, we use xxHash because it comes in the 64 bit version with Spark, and as we shall see in the following section, performs well for this task.

A note on performance

zipWithIndex() is known to be slow — especially when used with DataFrames, where conversion to RDD and back requires further serialization/deserialization of the rows.

A Spark SQL function for adding consecutive indices does not exist. This is most likely because adding consecutive indices to a distributed dataset inherently requires two passes over the data: One for computing the sizes of the partitions needed to offset local indices, and one for adding the indices. This wouldn’t work well with Spark SQL, the query optimizer, and so forth.

zipWithIndex() takes exactly the offset approach described above. The same idea can, with little effort, be implemented based on the Spark SQL function monotonically_increasing_id(). This will certainly be faster for DataFrames (I tried), but comes with other caveats that I don’t want to address in this post.

We claim to have an algorithm that solves the problem, but one important question remains to be answered: Does hashing the numbers from 1 to n using xxHash actually give a "good" random sequence?

In this section we will discuss how to evaluate PRNGs and run some experiments on our “xxHash the numbers from 1 to n”-PRNG.

First, let’s say that a random sequence of bits is a sequence where each bit takes the the value 0 or 1 with equal probability independently of the other bits. There are other definitions of randomness out there, but this one is both practical and to the point.

Notice, however, that if we were given a method for determining if a sequence is random according to the definition, any PRNG would fail this test. For any fixed t, a PRNG with a b-bit state can only generate 2b distinct sequences of length t. For any t>b, not all possible sequences can be generated, so a generated sequence can not be a sequence satisfying the definition of being random. Cue Von Neumann reference. 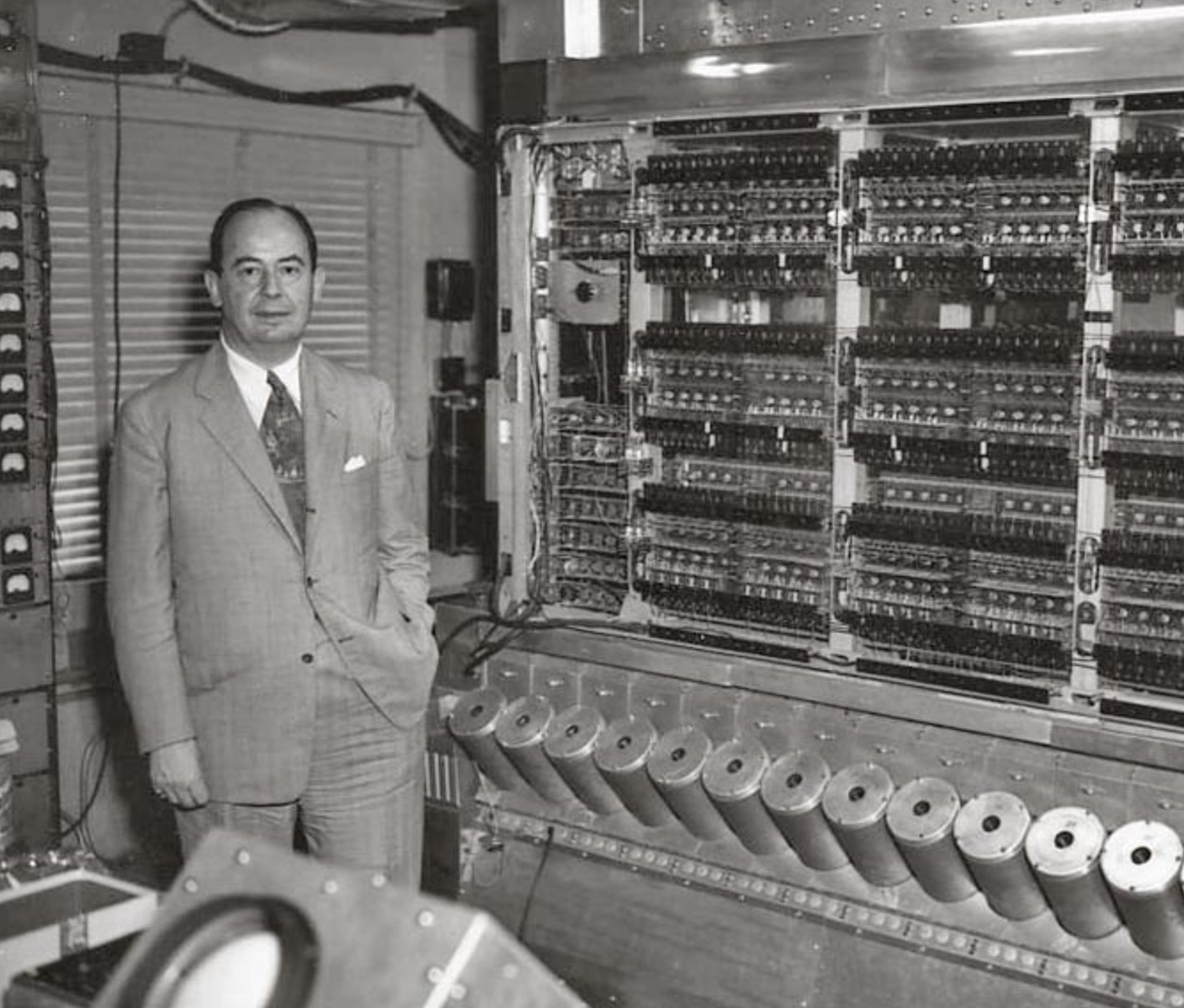 Obligatory picture of John Von Neumann, famous for, among many things, coming up with the first PRNG and saying: “Any one who considers arithmetical methods of producing random digits is, of course, in a state of sin.“ I didn’t take the picture, so it is not mine.

For example, the number of zeroes (or ones) in sequence of length n satisfying our definition is normally distributed with mean 21​n and variance 41​n. We may compute the mean for a sequence generated by our PRNG and submit it to a statistical test to determine if it is significantly different from the expected distribution.

Clearly, this test would not help us to reject sequences like for example 0n/21n/2, so more tests are needed.

Another example of a test is to compute the Lempel-Ziv parse of the sequence. The Lempel-Ziv parse is integral in many of the compression schemes used today, and the inverse relation between randomness and compressibility is quite obvious (random data does not compress well — see also Kolmogorov complexity). It has been empirically determined that the number of phrases in the Lempel-Ziv parse of random sequences follows a normal distribution with mean n/logn and variance 0.266n/(logn)3.

Again, some sequences can not be declared non-random based on this test because there are non-random sequences that do not compress well in the Lempel-Ziv scheme.

In fact, we may define infinitely many tests, and any PRNG will fail some.

A finite number of tests with various strengths have been suggested in the literature (see the References to learn more) and many of them have been implemented in two software libraries for evaluating PRNGs: TestU01 and PractRand. A good PRNG should pass the tests in these.

Next, we will test our PRNG with TestU01 and PractRand.

This blog post does a good job describing how to download, build, and get started with TestU01.

For xxHash, we use the official 64-bit C implementation available on GitHub.

TestU01 is designed to work with PRNGs generating 32 bits for each invocation. We insist on using the 64 bit version of xxHash, so in the following implementation we break hash values into its upper 32 bits and lower 32 bits. The state of the PRNG consists of the counter and binary value indicating if we should return the upper or lower 32 bits of the value. We increment the counter in every second invocation.

TestU01 consists of three collections of tests: SmallCrush, Crush, and BigCrush. The above program runs all three of them. It took around 12 hours on my laptop. The following shows that all three tests passed without any remarks.

PractRand lets you read the sequence to test from STDIN. The following C program implements our algorithm and writes the hash values to STDOUT.

This blog post describes how to set up PractRand. We run the above program and pipe the output to PractRand.

PractRand will run its tests for sequences of increasing size. I let it run for about 30 hours on my laptop, and ended up testing a 4 TB sequence. That is a sequence of 236 64-bit numbers, which was sufficient for my use cases. The output from the run is seen below.

As seen, our PRNG also passes the PractRand tests.

However, for short sequences, PractRand reports that the BRank test results are “unusual”. The PractRand test documentation says that “[f]ailures on BRank suggest that in some way the PRNG output, or at least part of it, was extremely linear, producable strictly by xoring bits of previous PRNG output.” It may be the case that for small input values with a lot of zeroes, the avalanching of xxHash isn’t as great as we could hope for.

For long sequences the same is reported for the BCFN tests. The documentations says “BCFN failures where the first parameter listed is low are typically similar in meaning to a failure on a DC6 parameterization [which is] typical of small chaotic PRNGs with insufficient mixing / avalanche.” Again, the fact that we are hashing a sequence of numbers increasing by one may reflect in the resulting sequence.

Our algorithm passed all tests in TestU01 and PractRand. Some tests are marked as “unusual” by PractRand, which may indicate symptoms of weaknesses in the algorithm.

For comparison, the LCG used in Java/Scala and the Xorshift PRNG used by Spark both fail a non negligible number of tests in both TestU01 (see the results in this paper) and PractRand (I ran this myself).

The decision whether our algorithm is strong enough depends on the use case. For something like random partitioning of data into training and validation subsets for machine learning, I would not hesitate to use the algorithm.

The header image used for this post is pixel noise drawn from random bits generated by our algorithm.‌ It serves no purpose other than visualizing randomness. Generally, visualization should not be used instead of statistical testing for determining if a sequence is random. But I wanted a header image for this post.

I generated the image by first writing random bits to a file.

This will run until ‌you manually stop it.

The file is read and translated to pixels on a canvas using the following Python script. 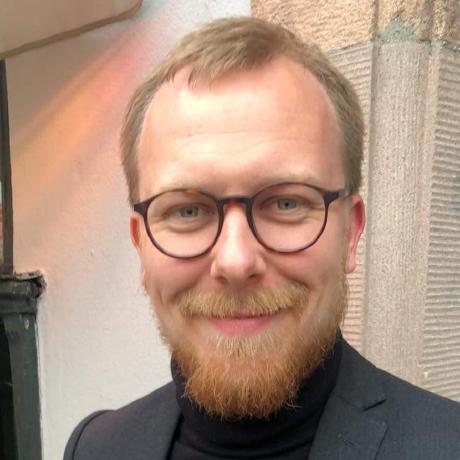 Opinions are my own and not the views of my employer.